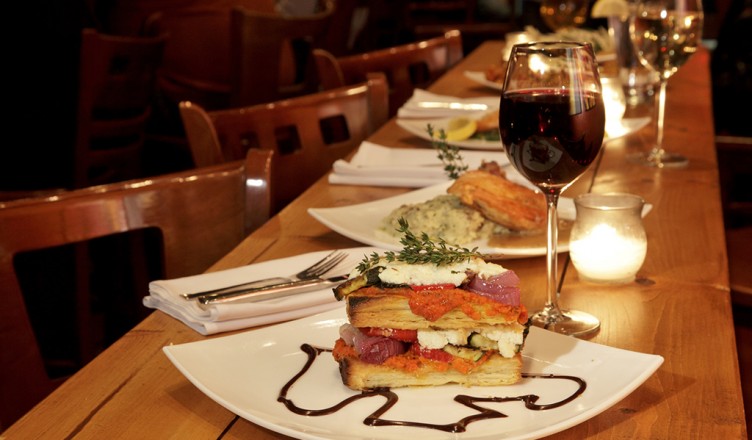 The Berkshires, nestled amid the rolling landscape of western Massachusetts, once played host to some of the country’s most notable artists and authors, including Norman Rockwell, Herman Melville, and Edith Wharton. Summer cottages flourished as city folk flocked to the bucolic hills for fresh mountain air. The onset of two World Wars and the Great Depression temporarily diminished the area’s growth, but over the last several decades the Berkshires has become the go-to summer getaway for those on the lookout for music, theatre, and dance. It also plays host to a bevy of carefully honed restaurants that rely on the region’s boutique farming industry. All of the restaurants highlighted here are members of Berkshire Grown (www.berkshire-grown.org), an organization that supports and promotes locally based agriculture by establishing local food and farm networks.

THE DREAM AWAY LODGE
There is, perhaps, no other locale in the Berkshires that embodies the creative marriage of food and music more than the Dream Away Lodge. Originally opened by local legend Mamma Maria Frasca and rumored to have been a speakeasy during the Great Depression, the 90-year-old property gained national attention from a famed 1975 visit by Bob Dylan, Joan Baez, and the Rolling Thunder Revue. The Dream Away Lodge subsequently appeared in Dylan’s film epic Renaldo and Clara and has since become a haven for artists and foodies alike. The Dream Away Lodge has been under the watchful eye of openly gay owner Daniel Osman since 1997, whose epiphany for a multi-dimensional space came to him after a three-week stint at a Radical Faery sanctuary. The menu originally focused on classic comfort foods, but with the arrival of chef Amy Loveless several years ago, international influences now offer a more modern culinary expression. Loveless grew up on a small farm in nearby Stockbridge in a family that grew much of their own food. “I had chickens and a cow and a goat. I was connected from my childhood to using ingredients that were at hand.” 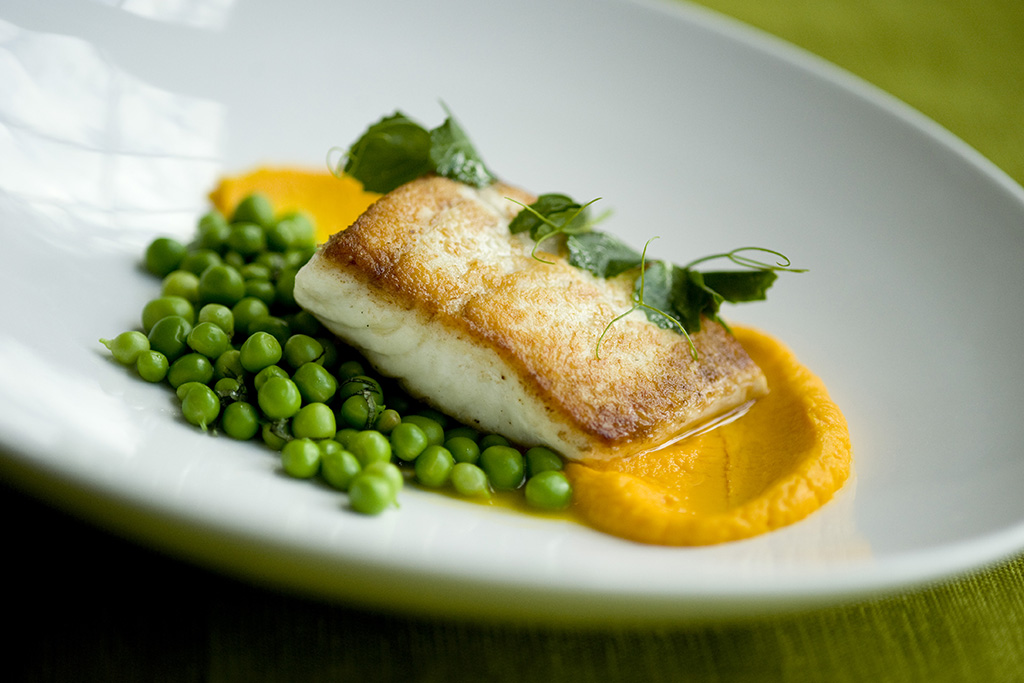 Public gardens, a wildflower meditation labyrinth, outdoor stone fire pit, and live music have made the Dream Away Lodge one of the Berkshires’ most eclectic food and entertainment venues. Osman shares, “The Dream Away has had a renegade his- tory of music and a fringe lifestyle—and I wouldn’t have it any other way.” 1342 County Road, Becket, MA. Tel: 413-623-8725. www.thedreamawaylodge.com

MISSION BAR + TAPAS
Visitors to Pittsfield will happily encounter funky art galleries and artists lofts, live theatre at Barrington Stage, and a burgeoning culinary scene that includes Mission Bar + Tapas, a trendy hot spot for sharable plates and wine. Owner Jim Benson tells me, “There is a social aspect of tapas—input comes from a lot of different directions, the server, the bartender, what you see on the table next to you. You have to have an openness to experiment and be surprised.” With dozens of menu items, Mission hits the mark with small bites that pack big flavor. Highlights include patatas bravas ($6), traditional fried potatoes with a honey- pepper dipping sauce; cracked pepper-crusted scallops ($13) mellowed by a vanilla sherry reduction; and organic grilled quail ($12) that beckons you with an aromatic blue cheese and fig stuffing. For a heartier meal, Mission offers traditional paellas ($17-$19) that will make you feel as if you’re in Valencia.

Mission’s liquor license only allows for beer and wine. Benson has made it a point to keep a revolving list and pro- claims, “I hate the idea of ‘staple’ items. People should be open to coming in and allowing us to guide the dining experience.” To that point, Mission offers six beers on tap and an exclusively Spanish wine list that only appears in chalk on the wall. Guests can expect Tempranillo and Albariño, among other indigenous varietals, and, of course, the Spanish sparkling classic, Cava.

Don’t be surprised when you try to call for a reservation (which they don’t take) and can’t find a phone number for Mission Bar + Tapas—they don’t have one. Just trust your instincts and theirs. You’ll be in store for great company, great food, and a mission worth repeating. 438 North Street, Pittsfield, MA. www.missionbarandtapas.com 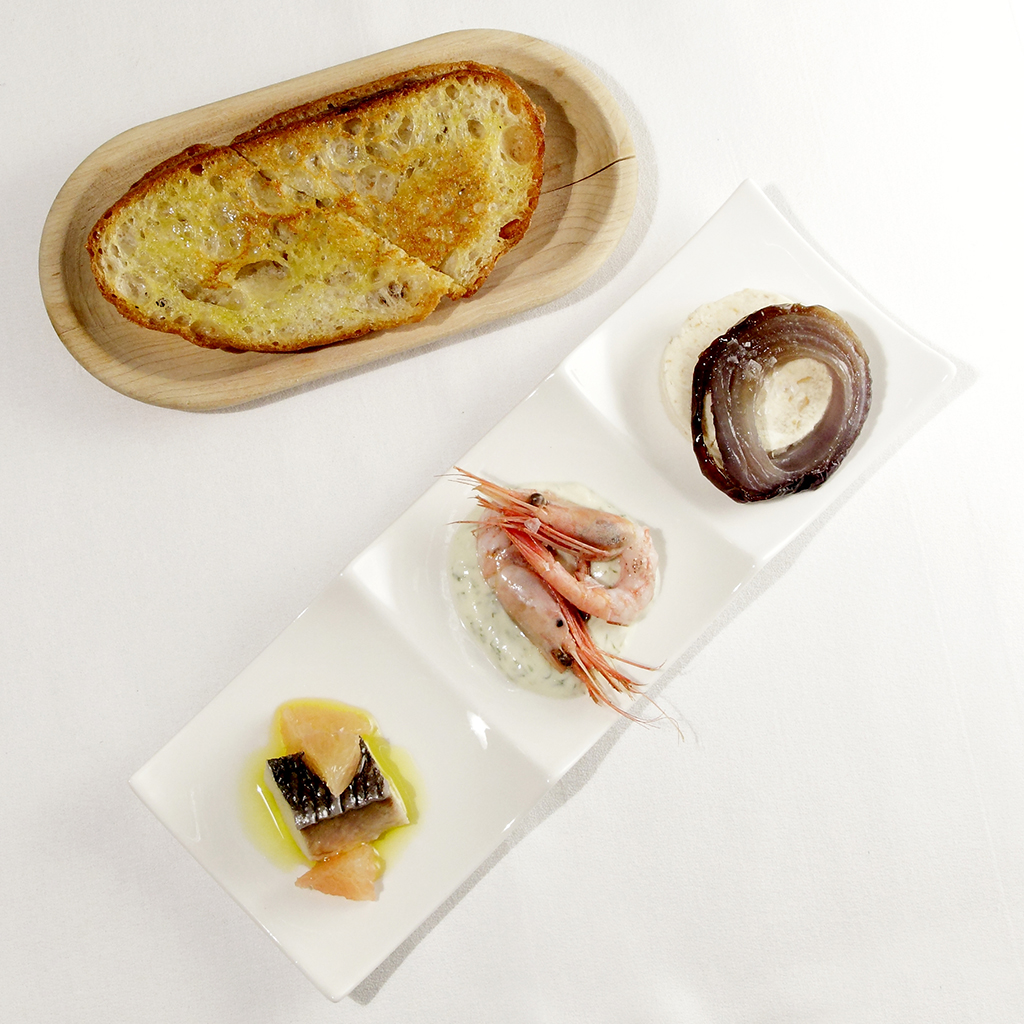 NUDEL
Nudel is tucked away in Lenox, one of the more historical enclaves in the Berkshires and home to Ventfort Hall, a stunning representation of the Gilded Age. While the town’s money may be old, the scene at Nudel, both on the menu and in the restaurant, is refreshingly new. To that point, Chef/Owner Bjorn Somlo is a bit of an enigma. Not interested in notoriety or TV chef fame, he refuses to be sterilely photographed in his chef coat. You’re more likely to find him cleaning the stove- top or taking out the trash at the end of the night. Somlo approaches his menu with the precision of a surgeon and the spontaneity of a jazz musician. Unfolding in a simultaneously calculated and unexpected symphony, seasonal dishes burst forth with unapologetic riffs of flavor and nuance. In spite of his technique, there is little pretension. “We’re a product-first restaurant. If you start with the best, your menu will be better. The Berkshires realized this a long time ago,” he shares, “We can do silly things though, and I want people to have fun.”

Nudel’s menu changes daily, relying heavily on farmer partnerships. Small plates average $10 and run the gamut from portobello confit with braised walnuts and quinoa to ceviche of Spanish mackerel with citrus and radish. There is always a selection of pasta dishes ($20), made in-house as well as meticulously sourced. One day you might find torchio with bone marrow toma- to sauce, another visit could unearth semolina gnocchi with turnip green and almond pesto and pork sausage.

Nudel continues to evolve as Somlo strives “to create a working environment that acknowledges that everyone’s quality of life is important as well. It’s a balance of worldeats how to be a good boss, a good leader, and a better restaurant. It takes time to get really good at what you do.” Somlo may not want to hear it, but Nudel is already really good—and those in the Berkshires know it. 37 Church Street, Lennox, MA. Tel: 413- 551-7183. www.nudelrestaurant.com 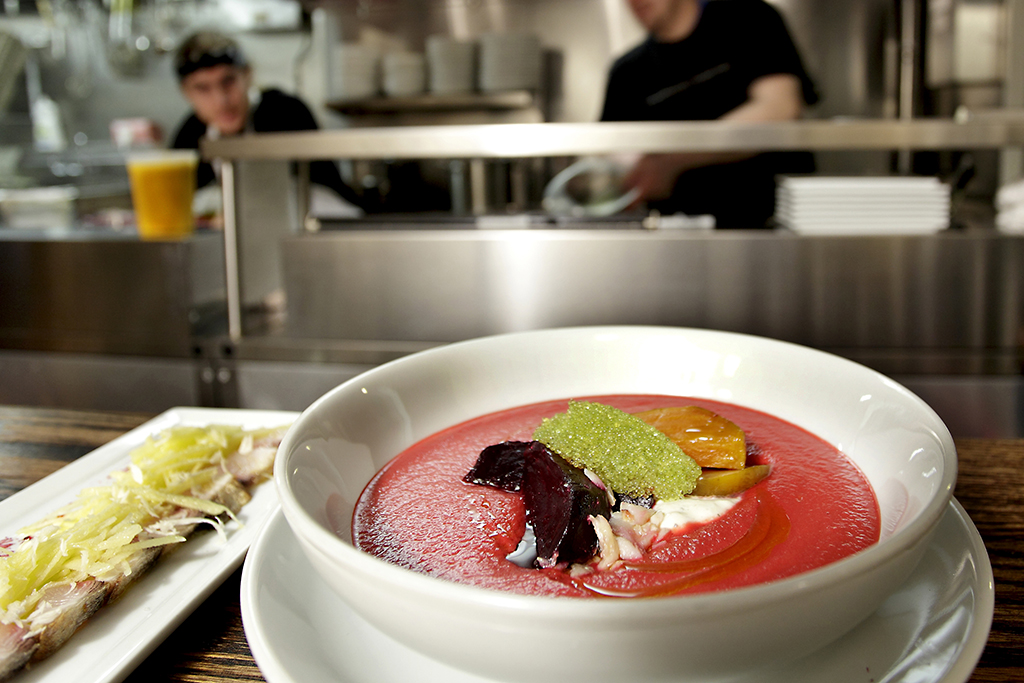 MEZZE BISTRO + BAR
Nestled on three acres overlooking Sheep Hill, Mezze presents an ever- evolving menu as overseen by Chef Joji Sumi. Sumi joined Mezze’s team in 2007 after fifteen years of learning the ropes in kitchens across the country. Influenced by classic French technique as well as his Japanese-American heritage, Sumi adheres to the seasonal philosophy while also evolving the restaurant’s charcuterie program. “We like to play with the classics. We’re technically sound and respect our ingredients,” Sumi shares, “Mezze welcomes a great clientele that appreciates the fact that we buy our food locally and know our farmers.”

Mezze’s bar offers bottled small-batch microbrews like Sixpoint Righteous Rye Ale ($6) and Rock Art American Red Ale ($5), bottled beers from Smutty Nose Brewing Company ($4) and Butternuts Beer & Ale ($3), as well as a carefully craft- ed wine list with most bottles under $50. While Mezze Bistro + Bar may be one of the old-timers on the Berkshires culinary front (which in the restaurant industry is a good thing), its interest and commitment to local farmers and food artisans keep it at the forefront of fine dining in the Northeast. 777 Cold Spring Road (Route 7), Williamstown, MA. Tel: 413-458-0123. www.mezzerestaurant.com