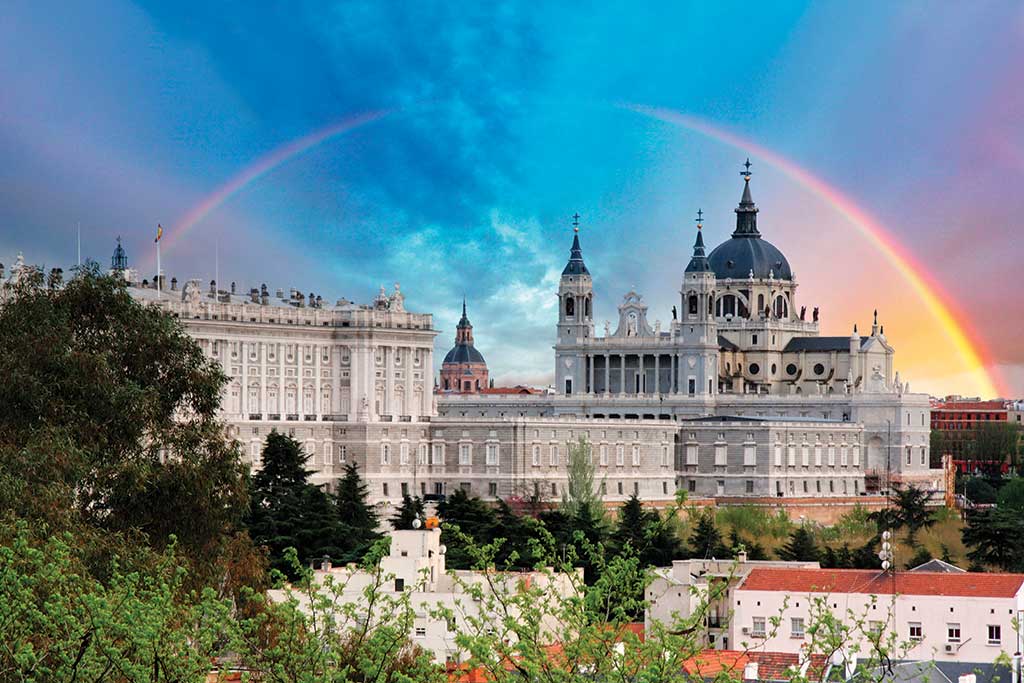 As Madrid will play host to World Pride 2017 from June 23-July 2 this year, allow my experience to serve as a prelude of sorts not only to the raucous excitement of Pride week itself, but also to the quieter charms of Madrid.

That said, there are a few events that are not to be missed, including the highly anticipated yearly High Heels Race. One of the earlier events of the week, this race is exactly what the name purports, a competitive race through Chueca featuring runners in high heels locked in a fierce battle to find out who can run the fastest while sporting footwear that is dangerously inappropriate to the task at hand. Massive crowds gather for this event that is a real hoot from beginning to end, irrespective of where your stiletto clad favorite places in the final analysis.

The other not-to-be-missed event of the week is, of course, the Pride Parade itself. As mentioned above, more than two million people annually attend the parade, which is, in a word, awesome to take in. I say this not simply because of the sheer number of attendees, but the fact that included in that number are people of all ethnicities, who are gay and straight, young and old, queer and transgender, outrageous and conservative. In Madrid, Pride is clearly as much about celebrating freedom in general and the acknowledged gay-friendliness of the city itself as it is about celebrating sexual identity, liberation, and acceptance, and that is a beautiful thing to behold.

For the 2016 parade, I had the privilege of riding on one of the ten or so open-air buses that form the centerpiece of the parade. Positioned thus, I was able to look out at the faces of the pride attendees gathered along the entire route. As we waved, laughed, and flirted with one another, I couldn’t help but think that this was what the spirit of Pride was all about—a happy coming together of people in celebration of love, tolerance, and respect. It wasn’t about the line-up of performers, the dance parties, or sexual hijinks. It was simply about coming together as people. How utterly refreshing is that? 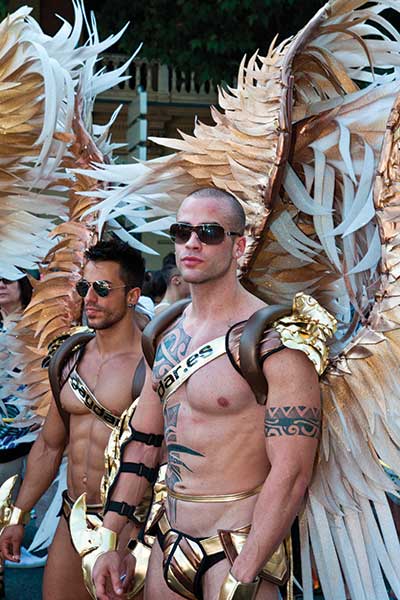 This year, as Madrid braces for World Pride, upwards of three million attendees along with 30 floats from different companies, associations, and political parties are expected, making it a celebration for the ages and adding a whole new level of awesome to an already stellar event.

The crowning component of the Madrid Pride celebrations is, of course, the nightly list of parties held all over Chueca at some of the neighborhood’s signature watering holes. Clubs like Sala Cool host events including Churros con Chocolate Madrid, where sexy pride attendees dance until dawn with a little help from a long list of guest performers. Meanwhile, We Party, a massive circuit party, resplendent with ripped bodies, slick choreographed performances, and world-class DJs represents the apex of all Pride soirées, starting late and blazing on well into the following day. As in years past, We Party will once again be the official party not only of Madrid Pride but also of the 2017 WorldPride Festival.

CELEBRATE PRIDE EVERY DAY
On one final note, even as the parties swing into high gear and the nights grow later, it’s worth remembering to continue to take time to get to know Madrid, to really get to know it and not merely flirt with it, as I had done for years. Between the last dance and the next big night out, early afternoons are meant for plugging into the magic of Madrid, for foraging sustenance at legendary eateries like Sobrino de Botín, which was founded in 1725 making it the oldest restaurant continuously operating in the world.

Also make sure to explore the local markets, like the historic Mercado San Miguel where patrons can sample everything from sushi and oysters to local cheeses and an array of tapas in a casual market like setting.

Those same afternoons are also ideal for a quick visit to the Temple of Debod, the Instragram-perfect Egyptian temple dating back to the second century B.C.E. which was dismantled, transported to Madrid’s Cuartel de la Montaña Park and rebuilt brick by brick.

Or you can spend an afternoon of hedonistic shopping along the swank Golden Mile in Madrid’s upscale Barrio de Salamanca.

The point is this, there is more to the experience of Madrid Pride, in general, and the upcoming World Pride, in particular, than the parties and the parade. Outside of those wonderfully loud, throbbing nightclubs, those gloriously excitable and friendly crowds, and the non-stop energy of Pride week, there is in fact a world of pride to be explored in the rich history and culture of Madrid. Let it call to you as it called to me, and your one-night-stand with the city might well turn into a full-blown love affair. 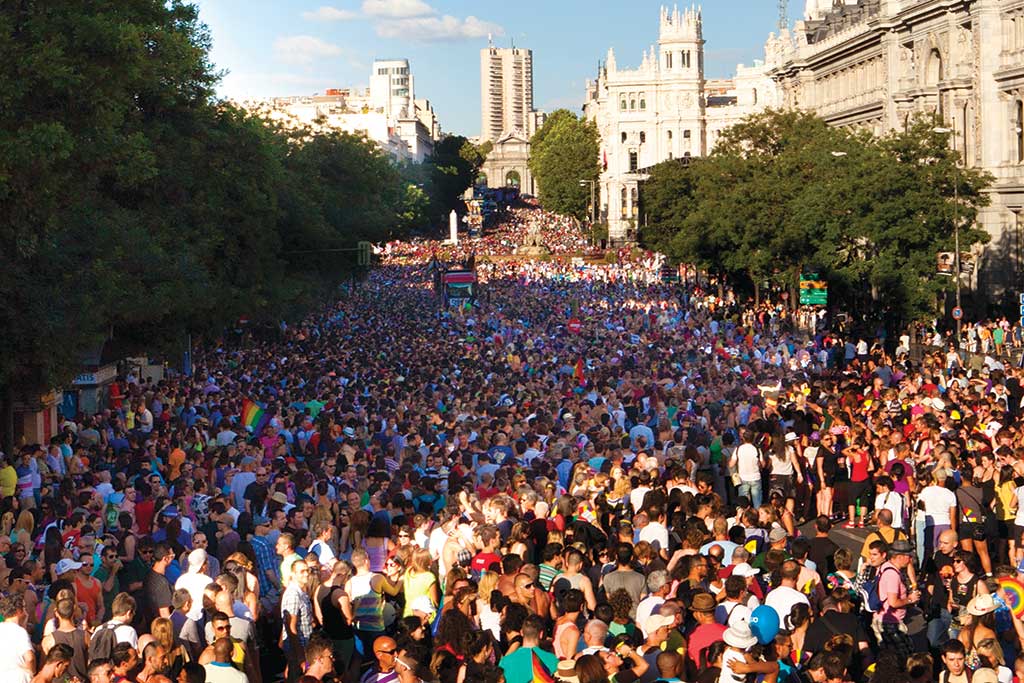 SLEEP
H10 Villa de la Reina, Gran Vía, 22. Tel: +34-91523-9101. Tucked away just off the busy, centrally located Gran Vía, this recently renovated 74-room boutique hotel is an elegantly, well-appointed property in close proximity to Chueca and some of the most popular destinations in Madrid. Rooms from $78-$418 +tax. www.h10hotels.com/en/madridhotels/h10-villa-de-la-reina

The Principal Madrid Hotel Marqués de Valdeiglesias, 1 (corner of Gran Via 2). Tel: +34-91- 5218743. This five-star, 76-room boutique hotel is home to a celebrated rooftop terrace as well as the 6th floor Ático penthouse, home to a menu of avant-garde cuisine and some of the most stunning views available in the heart of Madrid. Rooms from $239 +Tax. www.theprincipalmadridhotel.com

Room Mate Hotel Oscar, Plaza Vazquez de Mella 12, Madrid, Spain 28004, Tel: +34-91-701-1173. The hotel that was born of three friends—Kike, Carlos and Gorka—chatting about the kind of property they’d like to stay in, is now an international chain of sexy boutique hotels. The Oscar with its rooftop terrace and prominent location in Chueca was one of the first. Rooms from $132-$329 +tax. www.room-matehotels.com/eng/madridh

Vincci The Mint Hotel, Calle Gran Via 10. Tel: +3491-203-0650. A chic 88-room boutique hotel with an innovative reception bar and stunning rooftop terrace restaurant terrace and bar peering out over some of the city’s most notable buildings. Rooms from $100 +tax. www.vinccithemint.com

Thyssen-Bornemisza Museum, Paseo del Prado, 8. Tel: +34-91-791-1370. The ThyssenBornemisza Museum, or simply the Thyssen, is one of the preeminent art museums in Madrid, Spain, located near the Prado Museum www.museothyssen.org/en/thyssen/home

We Party holds 14 annual parties in Madrid; two festivals: We Pride Festival and We New Year Festival; and an international tour in more than 50 cities in the world: We On Tour. www.wepridefestival.com

Madrid — A World Of Pride was last modified: October 27th, 2017 by millawynn

December 21, 2020
Destination Europe is Sponsored by