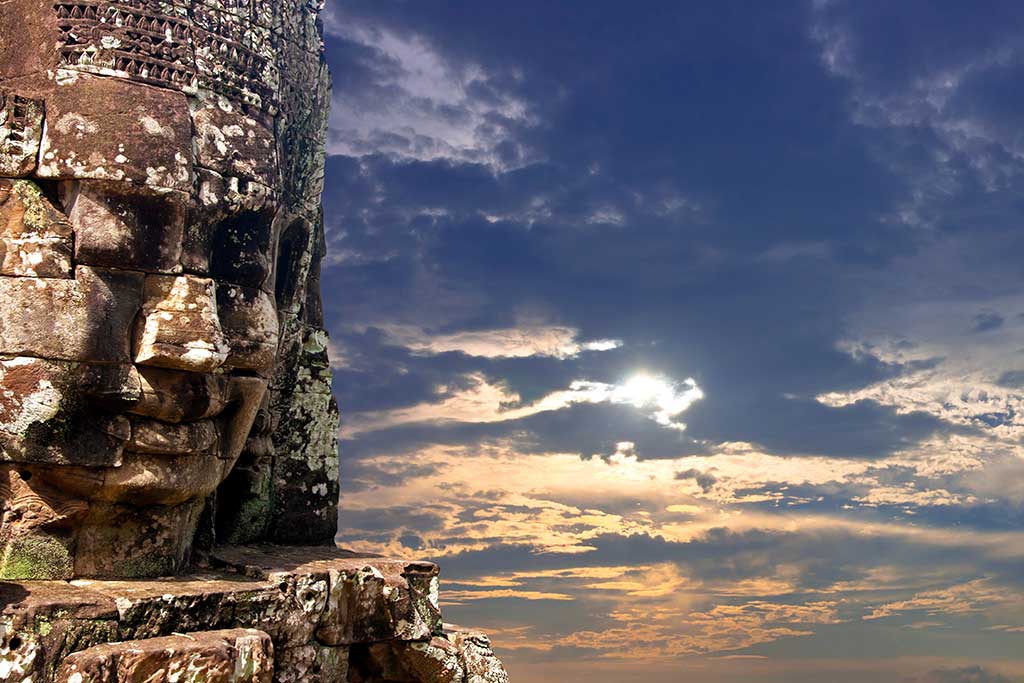 PHNOM PENH
There’s plenty to see in the bustling capital Phnom Penh, an easy bus or plane ride away from Siem Reap. During rainy season, it’s possible to travel by boat. Once known as the Pearl of the Orient, there are stucco-fronted villas and Parisian-style cafés dating from the period of French rule, which lasted 1863-1953. More exotic and Oriental in style is the 19th-century Royal Palace and Silver Pagoda. The official residence of Cambodia’s reigning monarch, the Royal Palace dazzles with its sweeping roofs framed by golden serpents. Named for its floor, which comprises over 5,000 solid silver tiles, the adjoining Silver Pagoda houses the highly revered statue of the Emerald Buddha, which itself is made of Baccarat crystal. 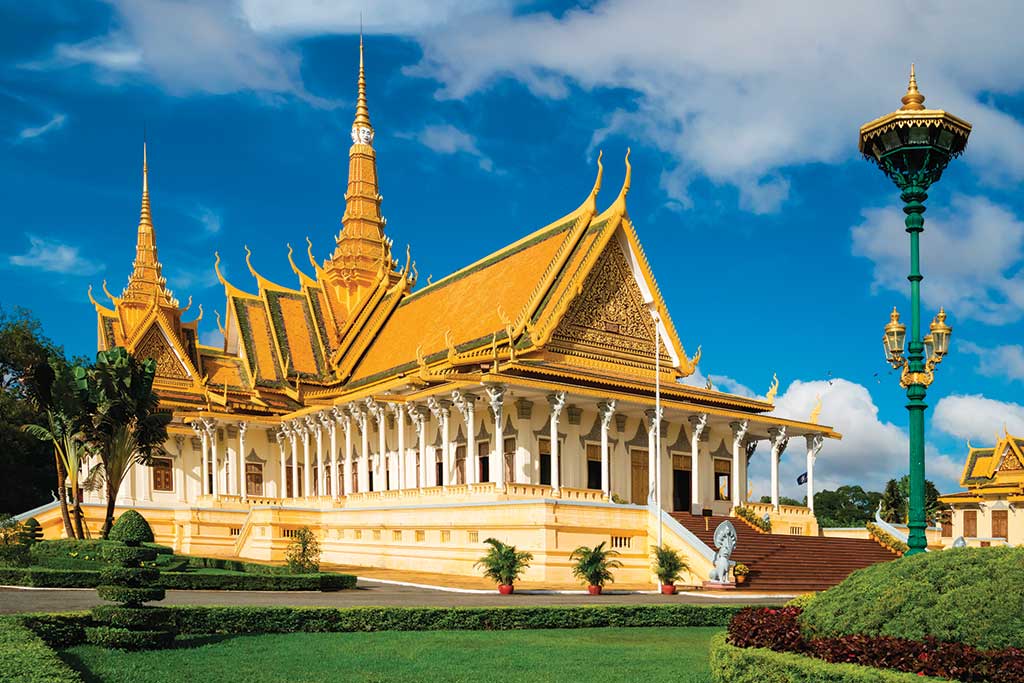 The Royal Palace in Phnom Penh

Far more sombre is Tuol Sleng Genocide Museum. Also known as S-21, in the 1970s this former school became a torture factory of the Khmer Rouge. Pol Pot’s regime was so paranoid that Cambodia was overrun with spies, conspirators, and operatives from the CIA and KGB, that they subjected up to 20,000 men, women, and children, people from all walks of life including students, doctors and humble peasants, to torture at S-21.

Life here was so inhumane that prisoners could be coerced into making all kinds of confessions. Evidence documents how the handful of Western prisoners, most of whom were yachtsmen seized after unwittingly sailing into Cambodian waters, were so brutalised that they’d admit to being CIA spies, naming in their forced confessions the likes of Mr. Magoo and Colonel Sanders as commanding officers. Cambodians would similarly name friends, family, and co-workers, unwittingly sealing the fate of those they named, as well as their own. Once a satisfactory confession had been obtained, prisoners would be taken to the nearby Killing Fields of Choeung Ek. When liberated in 1979, only seven prisoners were found still alive at S-21. Now a museum, it chillingly chronicles the horror that occurred within these walls.

After the tarnish of genocide, Phnon Penh is now regaining its pearly luster. Hip new neighbourhoods include Street 240, just behind the Royal Palace, which is lined with cafés and boutiques such as The 240, a lifestyle store with desirable fashion, furniture, and homewares, plus a café-bar serving tasty and stylish food. A tiny alleyway winding from here, Street 240 1⁄2 has another cluster of quirky bars and shops such as ARTillery Café, which is great for a healthy brunch or lunch, and speakeasy style Bar.sito, home to Cambodia’s cocktail cognoscenti.

For sophisticated formal dining, head to nearby La Résidence, one of Phnom Penh’s most exclusive restaurants, set in a villa amid tropical gardens. Its Michelin-starred Japanese chef, Takeshi Kamo, prepares fine French cuisine such as pressed vegetable terrine, conger eel brûlé, parmentier of duck confit, and risotto with shellfish and mango. The three-course weekday Express Lunch menu at $17 is remarkable value.

Just south of the Independence Monument, Street 308 harbors more hip venues such as Red Bar, a funky, no-frills watering hole popular with young expats and local creatives. Throughout 2014 and 2015, two brothers from New Zealand (the same guys behind Bar.sito on Street 240 1⁄2) transformed a once inconspicuous alley off Street 308 called Bassac Lane into a hive of micro-bars, each boasting its own unique identity. Utilizing concrete and steel, diminutive Hangar 44 is part bar and part showroom for a local custom-built motorcycle business, while Buzzing Cicada specializes in herb-infused gins. Others include burger and beer joint Meat & Drink, and book-filled cocktail bar The Library.

Retail options on this hipster laneway include Paper Dolls & Paperboy, a gay-owned boutique that specializes in Cambodian fashion brands and one-offs. Hip neighborhoods often boast their own micro-brewery, but in Phnom Penh they go one better: the nearby Samai Distillery opens every Thursday as a super-cool pop-up bar, with delectable cocktails made using handcrafted Samai Premium Rum. 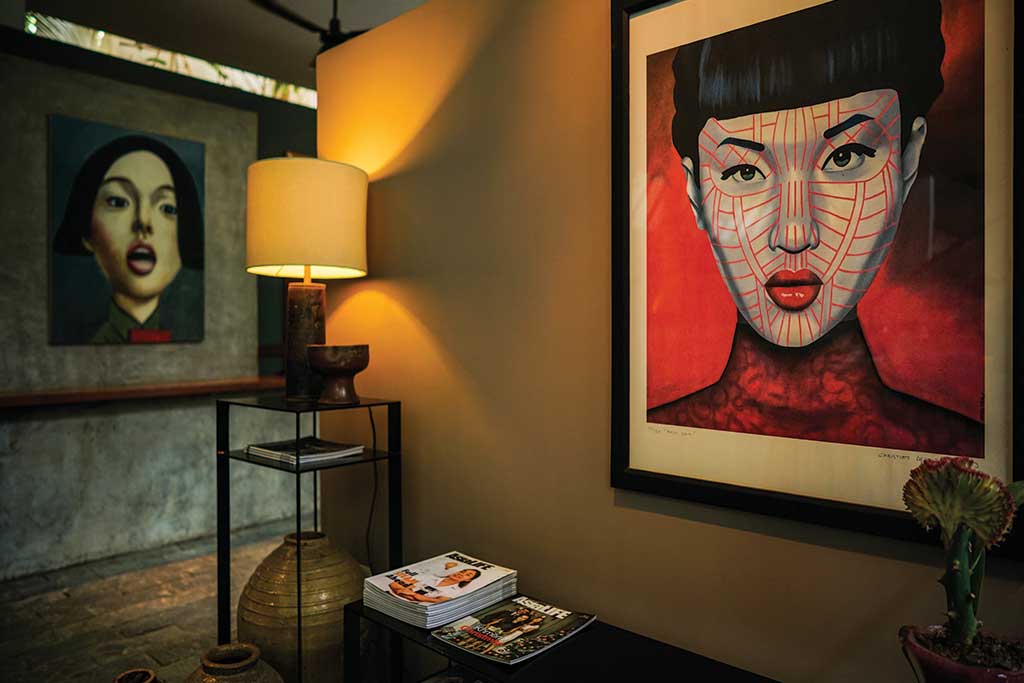 Restaurant options hereabouts include Malis, serving high-end Cambodian cuisine in a lush courtyard garden. One of Siem Reap’s best Italian restaurants, open a sleek Il Forno in Phnom Penh in 2015, bringing its menu of authentic Italian favorites to the Cambodian capital. An upscale option is Topaz, renowned as one of the top fine dining French restaurants in the Asia Pacific region.

Another lively quarter is the Phnom Penh Riverfront, where the Tonlé Sap River flows into the Mekong. A bustling promenade with street food vendors, balloon sellers, street-side cafés, bars, and shops, Sisowath Quay road is ideal for an early-evening stroll. Along here is the Foreign Correspondents Club, an elegantly faded colonial-style venue that rose to fame as the place where foreign journalists and aid workers would meet, drink and deliberate when on assignment here in the 1990s. It remains an iconic spot for a sundowner cocktail.

The city’s best hotel, Raffles Le Royal is every bit as grand and historical as its Siem Reap sibling. Dating from 1929, well-heeled guests have included former US First Lady Jacqueline Kennedy. In her honor, the hotel’s signature cocktail is the Femme Fatale, a mix of champagne, cognac, and Crème de Fraise Sauvage first concocted for Jackie O when she stayed here in 1967. During recent renovations, they discovered a glass said to be the actual one she drank from (and still bearing her lipstick), which is now displayed in the lobby along- side other precious memorabilia.

With increasing numbers of gay and lesbian visitors, two new hotels have recently joined the fray, and they’re coincidentally right next to each other. Having decided it was time his two Rambutan resorts in Siem Reap had a cosmopolitan city cousin, owner Dirk de Graaff considered purchasing a 1930’s building on Street 71 for renovation, but French couple Michel and Thibaud acquired that for their own gay hotel project, while Dirk acquired the neighboring plot of land and began working with architects on a new construction.

When they first discovered each others plans, both parties understandably had concerns, but ultimately the two hotels complement each other by appealing to a slightly different clientele. Rambutan Resort Phnom Penh is an urban oasis attracting a mixed gay crowd with its cool-as-polished-concrete aesthetic. Arthur&Paul (A&P) is a sexy men-only resort with bold monochrome décor, including erotic murals on bedroom walls inspired by French artist Jean Cocteau. Taking its name from Arthur Rimbaud and Paul Verlaine, the ten spacious guestrooms are named after other well-known gay couples including Pierre et Gilles, and Stefano Dolce & Domenico Gabbana. Single travelers needn’t feel alienated by all this coupledom, because A&P facilities include a clothing-optional swimming pool and a sleek gay spa/sauna open to non-residents, so interaction with locals and fellow tourists is all part of the plan. 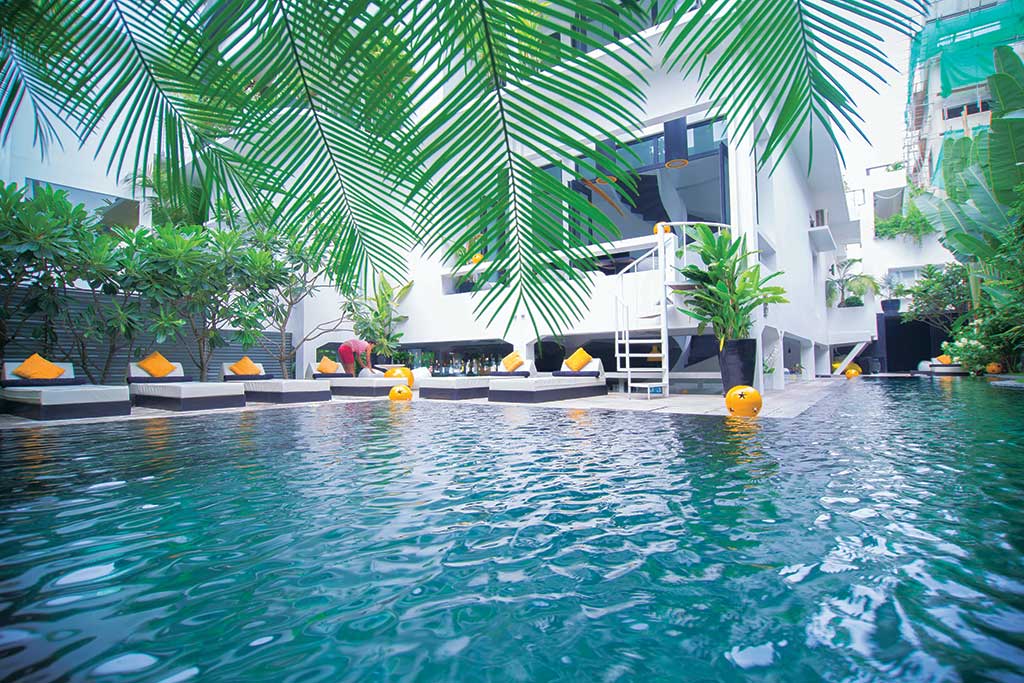 The city’s gay bar scene is equally vibrant. Blue Chilli is a lively spot with weekend drag shows. Pride Of Phnom Penh has live bands and ladyboy shows. One unique multi-use venue is Space Hair, a popular hair salon by day, it transforms into a buzzing gay bar at night. Its Khmer owner Sopheak Chuk has also combined his talents to produce a calendar featuring photographs of 15 stunning Khmer men for you to take home. In April 2016, the owners of Manor House opened Phnom Penh’s newest LGBT bar Vapor on stylish Street 240. A mainstay of Phnom Penh’s after-hours scene, the infamous Heart of Darkness dance club becomes less heterosexual and more hedonistic as the hour gets later.

Although it’s possible to walk between these venues, most prefer to take a quick and cheap tuk-tuk. Phnom Penh has a growing middle class and a thriving expat community, so unlike Siem Reap where tourists mostly frequent the restaurants, stores and gay bars, here in the capital they attract a much broader mix.

One evolving event for the diary is Pride Cambodia, held annually in May. From 2015, the owners of Rambutan and A&P have teamed up with local LGBT NGO’s and Meta House German Cambodian Cultural Center to develop it into an extensive calendar of workshops, film screenings, tuk-tuk races, pool parties, and club nights.

With so much to offer, it surely won’t be long before the treasures of Siem Reap are heavily plundered, and former ‘Pearl of the Orient’ Phnom Penh becomes as every day as imitation pearls. My advice is to visit Cambodia while the thrill of grit and commotion still exists.