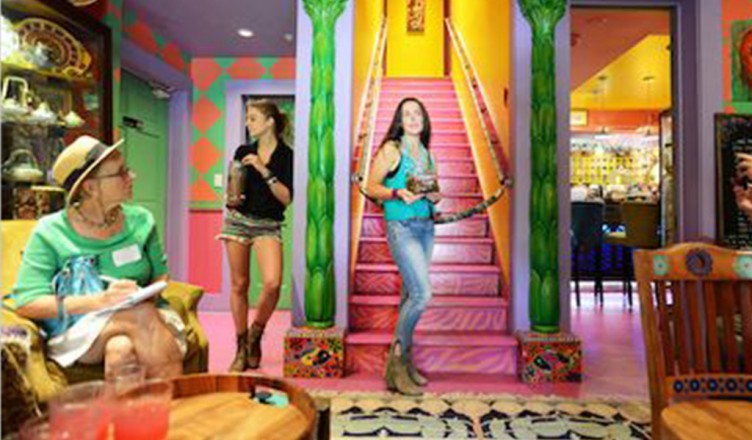 Visitors are snacking their way through Florida cities, visiting off-the-beaten-track spots and learning insider tips about the region, thanks to the growing popularity of a new type of sight-seeing tour – food tours.

Food tours take visitors to several interesting restaurants in an afternoon or evening. Tour members taste a sampling of local dishes, hear about the region’s history and culture and see highlights of the area’s sights. When they complete the tour, they’ve enjoyed the equivalent of a meal and learned their way around a new city.

“When you travel, food is the best way to learn about a place and its culture,” Rexach said. “We always plan our days around the food.”

They researched food tours on Trip Advisor because they had experienced and enjoyed them in other cities.

“I like this because it’s a less touristy tour,” Rexach said. “You feel like you’re seeing the real city, the places where people who live here go.”

The Miami Beach food tour (one of several competing food tours here) starts atBooks & Books, an institution on Miami Beach’s Lincoln Road shopping and dining mall. It’s a good example of how a tour can weave a city’s history into its food.

While tour members sampled a platter of appetizers that included hummus, corn salad, guacamole, ceviche and homemade corn chips, tour guide Juanita De Castro described how this popular book store was founded in the 1980s by Mitchell Kaplan, a member of a unique cultural group in Miami — Cuban Jews, who fled Castro and settled in Miami after the Cuban revolution.

Then it’s off to the next stop, Abuelo’s, a traditional Cuban restaurant with a take-out window where the tour guide, like most of Miami that morning, ordered a colada, a Styrofoam cup with enough Cuban-style espresso to share and serve four to six shots of the powerful brew. This is the way Miami workplaces are fueled, the guide explained. As tour members sipped their coffee and tasted pasteles (Cuban pastries) they learned about the various types of Cuban coffee, from sweetened cortaditos to the milder café con leche.

The Miami Food Tour includes only individually owned restaurants, which is typical of Florida food tours. It stopped at a family-owned Peruvian spot and a Brazilian restaurant. At each, heaping platters of food were served family style and the cuisine and restaurant’s story were described. Along the way, visitors learned about Art Deco architecture, the enduring legacy of “Miami Vice” and the Hollywood-worthy story of Miami Beach founder Carl Fisher.

The Miami tour covers 1.5 miles on foot and tour members pay a single price ($53 for the Miami Food Tour SoBe tour.) There are no transactions after that – no bills, no tips, no hassles – and that’s a standard feature of food tours.

“You don’t have to decide what to order. In fact, you get to try something you would never order,” said the cardiologist Jose Rodriguez. “You get to taste a little of this, a little of that. A little fish. A little steak.

“I’ve been to Miami on business several times,” he added. “But I didn’t get any real feel for the city like I did with this.”

Eating your way through Delray Beach

Ninety minutes north of Miami, there’s a food tour of one of three historic Palm Beach County areas every Saturday. These tours are operated by a non-profit organization, the Museum of Lifestyle and History, and its mission is both education and entertainment.

This tour travels by bus. The Delray Beach/Boynton Beach tour makes eight stops, including a historic church and an urban garden. It’s chock full of Florida history, with a particular emphasis on pioneer African Americans and Seminole Indians in addition to the white pioneers you often hear about.

As the tour continued, Newman and tour mates sampled their way through herbal teas, paella, sangria, coconut-crusted tofu, meatballs in jerk-seasoned sauce, lemonade from a secret recipe, macarons, grass-fed beef sliders, almond-crusted swai (a fish), finishing up at Sicilian bakery where there is a huge variety of cookies and pastries that few have room for.

The quantity and variety, Newman said, “is more than I ever dreamt.”

In St. Augustine, one popular food tour isn’t by bike or foot; it travels the cobbled streets by horse-drawn carriage. And the tour isn’t only about the food and the history; tour members sample wines, too.

The three-hour-long Vittles and Vino VIP Carriage Tour offered by the Tasting Tours includes four to five food tastings, three to four wine samples and bottle of wine to share on the carriage ride, according to co-founder Andrea Jones. It’s $109 per person. The company offers wine-only tours ($49), beer-tasting ours ($49) and a food-wine walking tour called Corks and Forks. ($79 per person.)

For restaurants, participating in these tours is a good way to reach new customers, especially visitors from out of town.

“We’re going off the beaten path,” Jones said. “We take them to places they would never find in a million years.”

Visitors interested in food tours may want to find out whether vegetarians and those with food allergies are accommodated. (Miami Food Tour went out of its way to make sure one tour member avoided fruits and nuts and that another had vegetarian options. The Delray Beach food tour cannot make special provisions.)

Most tours involve walking, so check if you need to wear those comfortable shoes.

Most tours go rain or shine and you must pre-pay to hold your spot.

Almost all tours can be booked as private tours for groups. Food tours, in fact, are a growing trend for bachelorette parties. Tour guide DeCastro, added: “They come down for a short period of time and it’s a great way to see the city in an afternoon. And then they’re free to party at night.”

Here’s a list of several established food tours. New ones are popping up all the time, however:

Miami Culinary Tours, South Beach tour is $59; Wynwood $69 and Little Havana $59.
Taste History Culinary Tours of Historic Palm Beach County, $40 per person. Tours are on Saturday: historic Delray Beach and Boynton Beach are held on the third and fourth Saturdays; historic Lake Worth is toured on the second Saturday of each month and the historic West Palm Beach Northwood Village neighborhood is toured the first Saturday of each month.

Ybor City Food Tours, Tampa, offers several tours for $59 each: historic walking food tour, Cuban sandwich tour, dessert tour, even a pet-friendly food tour with your dog. If your furry friend gets anxious around other dogs or people consider giving them CBD oil for dogs from chron.