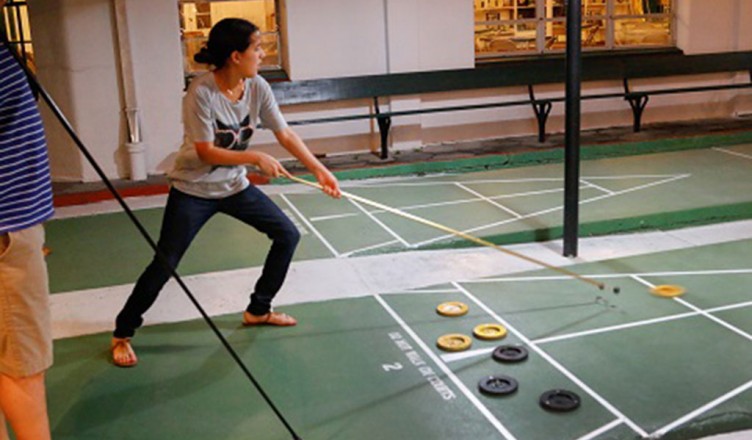 It is a cool downtown Friday night and the biggest, oldest shuffleboard courts in the world echo with the slow scrape and clack of tangs and biscuits.   Strings of white lights dangle over one set of courts and old-fashioned lamp posts illuminate another. Green benches anchor each end and chalkboards on posts stand ready for score keeping. A grandstand overlooks a third court, a throwback to the days when the St. Petersburg Shuffleboard Club, opened in 1924, boasted thousands of members and Central Avenue was lined with green benches and slow-moving retirees flocked to the Sunshine City.

If the courts symbolize the old, they also symbolize the new — the new downtown St. Pete that is drawing national attention for reinventing itself as a place pulsing with the creative juices of artists, the young, the hip and their fellow travelers. What began with a small group of hipsters out for some ironic fun on a Friday night has turned into a scene so lively and cool it has been replicated in hipster Brooklyn. These Friday nights regularly draw 200 people, many with coolers full of their favorite adult beverages.

For many that means something from Cycle Brewing, one of the most highly regarded craft breweries in the country, located in a storefront just blocks away and run by a decidedly shuffleboard-centric group. Owner/brewer Doug Dozark got married on one of the courts and the Cycle Railbenders are the reigning champions of the club. Cycle also is the club’s biggest sponsor and has two courts named after it.  So it was natural that Cycle would brew a shuffleboard beer. Tang and Biscuits is a session IPA named after the shuffleboard stick and puck. A pit stop at Cycle for a growler or crowler fill — draft beer to go in glass or can containers — is a good way to prep for the courts.  The brewery’s tasting room is all about the beer. There are no other distractions — no TVs blaring from the walls, no dartboards or Jenga crashing to the floor — just a long L-shaped bar, some high-top tables,  local art on the walls, tables and chairs on the sidewalk. The brewery, founded at Peg’s Cantina in Gulfport, creates myriad styles, from Florida Weisse to brown ales, but is best known for its barrel-aged stouts and session IPAs.

A session beer like T&B, or Cycle’s flagship Fixie (its most popular beer) fits the slow and easy shuffleboard pace. Both are full of flavor — with notes of rye in the T&B and citrus in the Fixie — but low enough in alcohol for a long, languid evening. Tang and Biscuits is brewed only periodically, though Fixie almost always is available.

Craft beer and shuffleboard are a perfect pairing, says club president Christine Page. “I think there’s such St. Pete pride right now,” she says. “We love everything local. There’s no place exactly like this in the world and we have local beers unique to our city.”

Beer is poured at Cycle Brewing in St. Petersburg. – Photosinmotion.net   Club membership was down to 35 10 years ago, from 6,000. Today it has hundreds of members, mostly young. “We’ve broken the stereotype of shuffleboard but more importantly we’ve introduced this great game to a new generation,” Page says.