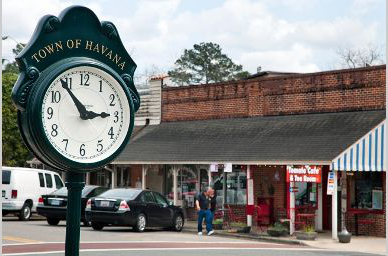 Over time, towns and cities re-invent themselves and, time and time again, the town of Havana has done this very well.

Following its early days as a center for tobacco production, far-sighted merchants transitioned the heart of the downtown district into a center for antiques, furniture and restaurants to create a popular day trip destination for travelers from across western Florida and neighboring Georgia and Alabama.

At the rambling Planter’s Exchange stocks of fertilizer (once a popular staple at local shade tobacco farms) have been replaced by a range of collectibles and antiques, many of which would be at home in a New York gallery.

A few blocks away, the design center Wanderings calls to mind the style of an elegant Miami showroom – with only the rumble of passing locomotives adding a reminder that freight was once dispatched from the back doors of the former railroad depot.

Although nearly everything’s closed on Mondays and Tuesdays (a reflection of its rural roots, perhaps), every other day of the week and every season of the year is a good time to make your way to this small town only 17 miles northwest of Tallahassee.

In the offices of the Havana Herald where books and periodicals on local history are sold and the perfume of printer’s ink wafts through each room, editor Nick Bert offers a concise recap of the last 100 years.

For decades, local farms were growing tobacco. Not smoking tobacco, butwrapping tobacco for cigar brands including King Edward, Hav-A-Tampa, and Swisher Sweets. But in the early 1970s many farmers packed up the farms and moved their operations to the Honduras; their absence left downtown in the doldrums for more than a decade.

“Then around the late 1980s merchants began bringing in antiques and things have stayed pretty steady since then,” Bert explains. “We don’t have as many antiques as we used to, and there’s really no place to stay, but Havana still has some antiques along with gift shops and furniture galleries and home décor stores and cafés that bring in shoppers from Tallahassee and Thomasville, from Bainbridge and Dothan and Panama City.”

And some come from Miami. Around the corner at Mirror Image Antiques(nearly everything’s around the corner in Havana), former flight attendant Sandi Beare Schenker moved to town following the demise of Eastern Airlines and, with her husband, Rick, created a new life as a Havana merchant.

“There are more than 30 independent shops in Havana,” she explains in an instant before gliding smoothly into a laundry list of reasons to visit her adopted hometown.

“Within three square blocks there are six eateries. Each Saturday we have a farmer’s market featuring certified naturally grown produce. There’s a year-‘round calendar of special events, and we were twice voted the Friendliest Small Town by readers of Florida Monthly. I’m amazed that even in the recession we were growing. But that’s because the people that come here and take a chance have the spirit and heart of entrepreneurs and everyone’s doing what it takes!”

Is there anything missing? Schenker doesn’t hesitate.

“We have no place for visitors to stay. We would love for someone to open an inn!”

For nearly six years Terri Paul roamed around the world and in the middle of her wandering her father proposed a deal: If she would dedicate five years to a business partnership, she could still take several shorter trips each year.

That was in 1993. Today in the old depot that doubled as a warehouse for hardware, tobacco, and feed, Paul’s shop – Wanderings — features imported accent pieces and custom-designed furniture. Like Schenker, Paul’s affection for the town helps her shift easily into the highlights of Havana.

“We have four major furniture stores, six cafés and restaurants, three art galleries, a chocolate shop, ice cream shop, and stores selling wonderful jewelry. Wander around the shops and then after five o’clock when they’ve closed just sit down and relax with a glass of wine. Havana’s a place where you can just slow down.”

Having made the change from an agricultural community to one of commerce, the people of Havana have proven they can do what it takes to attract visitors and keep the town viable.

But when you arrive, you’ll see that there’s still room to grow. Sprinkled among the downtown district are empty storefronts patiently awaiting new residents who will bring with them “the spirit and heart of entrepreneurs.”

But whether you arrive as a visitor, a hopeful entrepreneur, or a prospective resident, within minutes of the state capital Havana has everything you need: History, hospitality, and opportunity.

Everything but an inn.