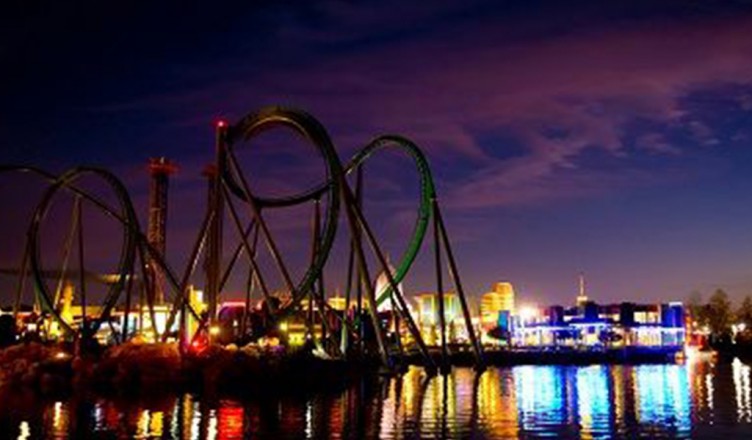 The illusion of “I am free-falling off a skyscraper.”

These days, my favorite thrill rides get my adrenaline pumping and trick me into believing the impossible.

Thanks to advancing technologies, I can play Quidditch with Harry Potter or meet angry dinosaurs. I can also test the limits of physical experience without putting myself in real danger.  A battle against Decepticons? Why not? A rock-n-roll blast-off with Aerosmith? Done.

High-speed attractions engage everything from the senses to our internal organs, says Robert Criss, professor of physics at the University of South Florida.

The more that goes on during a ride, the more we feel and the more willing we are to wait in line.

Our experiences are partly the result of acceleration, or the rate at which an object changes its velocity, Criss says.

Riders sense acceleration as ride vehicles push against the body to change direction. If the body is forced forward, the heart and lungs will lunge forward too, creating a noticeable sensation.  Many thrill rides also fight gravity, creating feelings of weightlessness and at times, lifting us right out of our seats.

Here are some examples of the thrills you can find at Florida’s theme parks.

Nothing makes my belly flip like a good drop tower. These tall wonders, designed to simulate the sensation of, say, falling down an elevator shaft, trigger my fear-for-fun response, elevating my heart rate and releasing loads of adrenaline. So what makes it feel like my stomach has risen to my throat?

“The stomach is accustomed to hanging from the rest of the organs, being supported by a frame that is in firm contact with the ground, which is pushing back. This is not so during a free fall,” Criss says.

For this thrill, check out the 150-foot Dr. Doom’s Fearfall at Universal’s Islands of Adventure or, my favorite, The Twilight Zone Tower of Terror at Disney’s Hollywood Studios. The Tower, which opened in 1994, drops riders 13 stories, brings us back up and drops straight down again, all in the dark.

The recently opened Falcon’s Fury at Busch Gardens Tampa Bay takes guests up 300 feet, pivots so they are looking face-down at the ground and then drops at 60 miles per hour. Yikes!

When a drop or twist comes without warning, the resulting rush is even sweeter.  From Space Mountain at Disney’s Magic Kingdom to Harry Potter and the Forbidden Journey at Universal’s Islands of Adventure, dark rides rely on the element of surprise to intensify thrills. Many also feature lit scenes and visual effects.

At the top of my list for dark coasters: Revenge of the Mummy at Universal Studios. As if fire-breathing mummies weren’t enough to get the blood pumping, the attraction combines special effects with coaster speeds.

Another great dark ride is the aforementioned Harry Potter and the Forbidden Journey, which uses robotic arm technology to make it feel as though you are flying in and out of harrowing scenes from the movies.

Shot out of a cannon

No matter how I prepare myself for the sudden jolt associated with launch coasters, when it hits, it hits hard. One moment I am sitting still then, bam, electromagnets propel the ride car from zero to rocket speed. I feel glued to my seat and am rendered breathless.

Cheetah Hunt, Florida’s newest launch coaster, is open at Busch Gardens. Others include Rock ’N’ Roller Coaster at Disney’s Hollywood Studios and The Incredible Hulk at Universal’s Islands of Adventure.

Loops are exhilarating because the human body experiences multiple sensations in a short period of time, says Tom Henderson of the Physics Classroom.

Though coasters move through a loop in mere seconds, the forces at work change drastically from one point to the next. This explains why I feel pressed to the seat going into the loop and nearly weightless at the top. Coming back down, I usually get a head rush.

“Roller coasters thrill us because of their ability to accelerate us downward one moment and upward the next,” Henderson says.

Get loopy on Kumba at Busch Gardens Tampa Bay or Kraken at SeaWorld Orlando.

Water rides remind me of driving through a hilly town. There are usually a lot of small drops throughout but no real belly flips until the big dive at the end.

Among the super soakers are Splash Mountain at Disney World’s Magic Kingdom, the Jurassic Park River Adventure and Dudley Do Right’s Ripsaw Falls at Universal’s Islands of Adventure and Journey to Atlantis at SeaWorld. These rides end with a massive plunge, dropping guests as far as 84 feet. I most always catch some air time.

On an inverted coaster, the feet dangle free. It feels like floating through open air and when the rides go upside down, all you see is sky. Without a place to firmly plant my feet, it’s dizzying. But, these rides are super smooth.

For this twist on the traditional coaster experience, visit Montu at Busch Gardens Tampa Bay or Dragon Challenge at Universal’s Islands of Adventure.

Manta at SeaWorld Orlando is Florida’s only flying coaster. Riders glide in the prone position through inversions at 56 miles per hour. The ride is designed to mimic the movements of a manta ray gliding through the sea.

“Because you’re tilted down, it’s a completely different experience compared to other thrill rides,” says Ashley Reams, theme park enthusiast. “You almost feel like you are really flying, which is incredibly exhilarating.”

Transformers the Ride 3D at Universal Studios Orlando is the newest attraction to combine 3D effects with motion thrills.

Three-dimensional robots tower above riders, battling it out for the fate of the world. Incorporated seamlessly with the story, simulated lifts, drops and jerks make the experience feel deceptively real.

The body moves around a lot on this one, but for all that, the motion thrills are pretty tame. The height limit is just 40 inches to ride. It’s similar to Spiderman at Universal’s Islands of Adventure, but more immersive.

Back to the Future

Some theme park goers may recall the old Back to the Future simulator ride at Universal Orlando. Well, that ride is long gone. Universal replaced it with the Simpsons Ride, which is the same type of attraction. These rides are great for mild thrills. The ride car moves around without ever really going anywhere.

The body gets moved from side to side quite a bit, so heed that heart, neck and back problems disclaimer. Classic simulators include Star Tours at Disney’s Hollywood Studios and Soarin’ at Disney’s Epcot.

For a more intense experience, check out Mission Space at Disney’s Epcot. The ride simulates the feeling of a space shuttle launch. I recommend not riding this one right after lunch.