Top Posts
Wilson Cruz and Other Celebrities Speak Out for...
Decorate Like A Designer With Jonathan Adler
Future Perfect Project Giving Free Concert at Lincoln...
Pack Your Bags and Prepare to Celebrate Pride...
Visit Lauderdale Launches New Campaign to Show the...
Tom Prior: The Star of the Gay Biopic...
8 Awesome Things to Do in Canada’s Banff...
Earth Day: 5 Countries Going Green and How...
Experience The Lexus International Gay Polo Tournament
Sonoma’s Gay Wine Weekend Returns in July
Home Destination Europe Falling In Love With Iceland 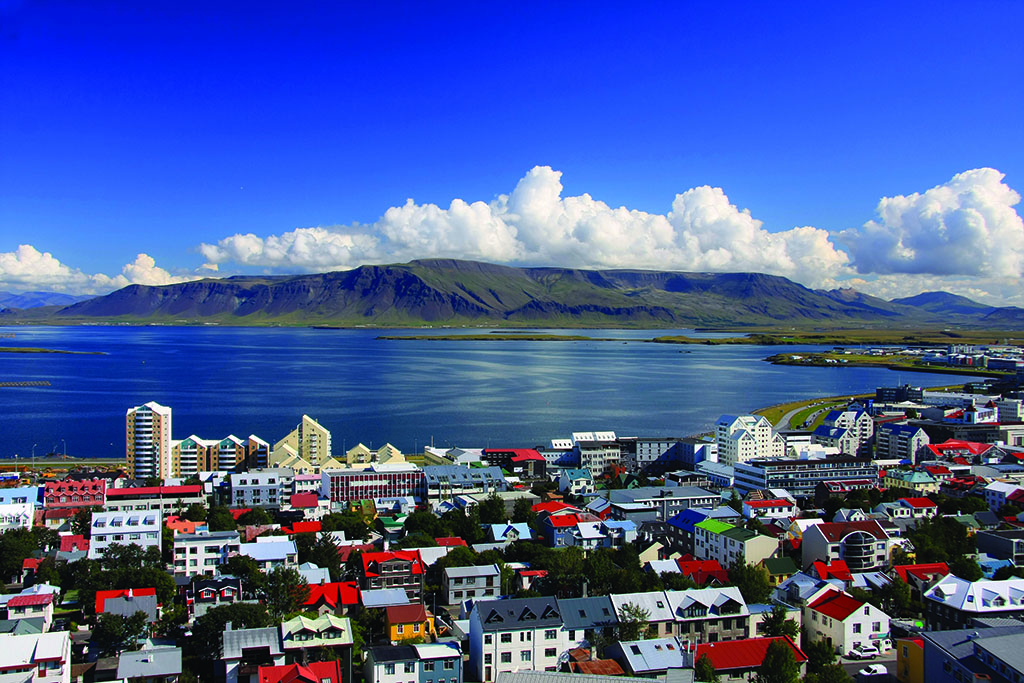 Reykjavík has a strong café culture, particularly within the gay community.

The moment you glance at the front door, you know you are in for an authentic home-cooked meal at Við Tjörnina. With décor ranging from antique family photos and old velvet sofas to stained glass lamps, the ambiance brings you back to a visit to your grandmother’s home. If the grandma style is a turn off, ignore it, because the food, while very traditional in its ingredients, is a far cry from what grand- ma made. The presentation of each dish is almost sculptural—each component perfectly towered on the next. The baked salt cod with smoked pork belly and dill potatoes and the traditional Icelandic skyr with berries and cream is a highlight.

A new restaurant opened earlier this year called Silfurtunglið (Silver Moon), which is in the same location as the famous club that had the same name from 1950s to 70s. Retro knickknacks are sprinkled around with modern, Icelandic-designs that work together to make a cheerful and playful dining area. Getting a table at a brand-new restaurant in Reykjavík isn’t always easy, so be sure to call ahead. Here, you can enjoy old- school cocktails and elevated American-inspired cuisine.

Since 1995, gay-owned and operated Humarhúsið has been serving up delicious lobster feasts in a romantic and comfortable environment. Located right downtown in a house built in the early 19th century, you can expect delicious food and delightful service. We opt for the more traditional Icelandic lobster feast—with the Icelandic lobster cooked and infused with lamb. This mouth-watering dish is an absolute must and is just what’s needed on a cold evening. Prices here are quite expensive, so be prepared to splurge a bit. 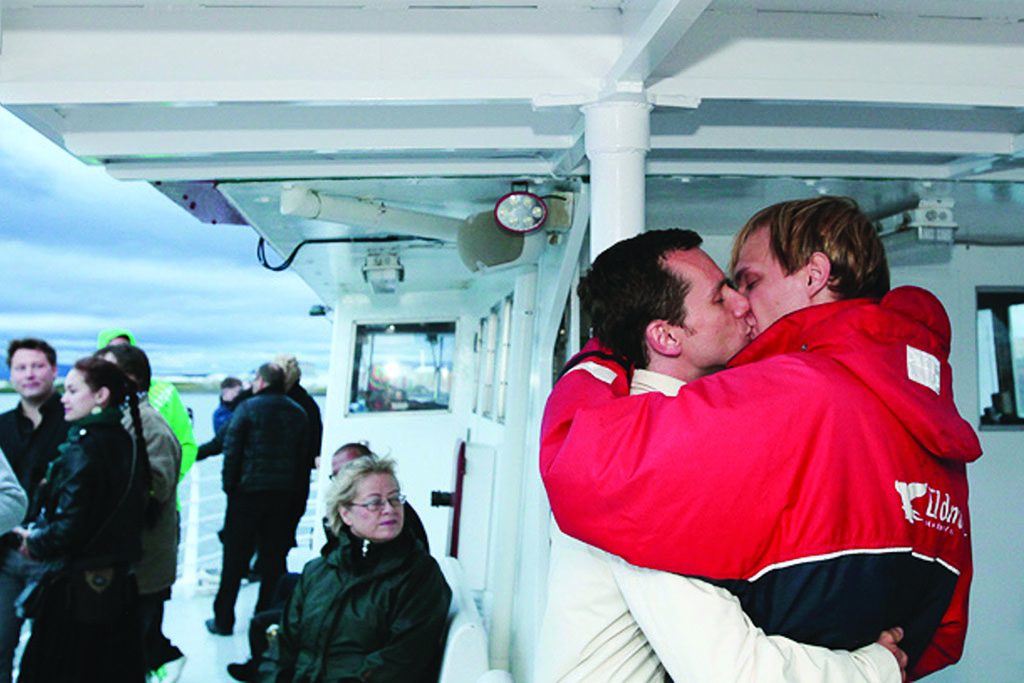 In many ways [Iceland’s perception of gay people] has changed for the better. The legal framework, with a gender-neutral marriage, protection, and equal rights in every aspect, is of course something that has to be celebrated,” Magnússon says of the status of gay and lesbian people in the country. “A new bill regarding transgender issues has also been put before parliament and will mean that transgender people will, for example, enjoy the same rights as other groups when it comes to protection against hate crimes and discrimination,” he adds.

Naturally, the best way to interact with the vibrant, close-knit gay community is to head out on the town. You’ll be doing yourself a disservice if your visit to Reykjavík doesn’t include an action-packed evening/early morning. At 4 A.M. on a weekend, you’ll see more people on the streets than you would at any time during the day. This raucous vibe is infectious, and you’ll get quickly swept into the fun. Don’t start your evening till late, especially in the summer when all-night sunlight forces people to go out later and stay out even later. Single travelers will enjoy the no-attitude crowds. “The Icelandic gay scene is very welcoming. Because Reykjavík has a population of 180,000 people, the locals will immediately notice any newcomers and are very interested in getting to know them,” Manny says. “Chances are that once you meet one Icelander in the gay scene, they will introduce you to all their friends and you will soon be part of the small gay community.”

With the closing of Barbara and then the closing of its reincarnation Trúnó by Barbara Sunshine, there is only one gay bar left in town. In February, Boys Club and Gay 46 opened. Gay 46 is a decent-sized establishment with a large bar area that includes pool tables and seating areas. In the back is a nice dance floor with some tacky decorations strewn up (90s pop music posters). Because Reykjavík is so inclusive, gay bars tend to be filled with lots of young straight girls, so the owners of Gay 46 decided to open a men-only section of the bar called Boys Club. There was a need for this after the leather bar, MSC Iceland, closed its doors. In the back is a small bar with sexy pictures and porn plastered on the wall and a small dark room that remained empty while we were there.

Remember, though, that gay people are welcome in a majority of bars in the city, so be sure to visit some of the trendier spaces to get a feel for just how fashionable and wild the city can be. Probably the most popular bar in town is Bakkus, which occupies the old second floor of Barbara. Here, you can grab a few drinks while watching the hipster crowd dance around to the latest Icelandic bands. Down the street is another popular haunt, Boston. This bar is filled with inebriated kids downing shots of Brennivín and Opal (the former is Iceland’s signature schnapps), but if you’re lucky, you may have a celebrity moment as Björk tends to frequent here when she is home. If you muster enough energy to stay out till the bars close their doors, you can see just how busy the city’s nightlife is as hundreds of people pour onto the main street (many still drinking) and make their attempts at last-minute hookups or go to get some late-night snacks. If the former fails, be sure to eat a world-famous hotdog from Bæjarins Beztu Pylsur.

During our last night, we’re picked up in a Super Jeep, but this time by Icelandic Mountain Guides, a company that offers more intimate tours. It’s February, so we’re hoping to spot the Northern Lights, but after word at our hotel spread that all the large group Northern Light tours have been canceled we can’t help but feel discouraged. Our tour guide/owner of the company, Einar, though, wants to show us a good-time with or without seeing the illuminated night sky. We drive to the south shore where we off-road onto the black-sand beach. Along with the dark-colored sand, the area’s void of most natural light except for the moon reflecting the sun through heavy cloud coverage. Guided by the sounds of waves clapping we inch toward the water and remain silent. We lose our sense of place and discard our modern-day concerns. Right now, it is just us and Iceland. I look up and close my eyes to transport myself even further. And just then, I get smacked hard in the back. “Look,” Reed says. For a split second a brilliant green swirl of the Northern Lights appear through an opening in the sky. 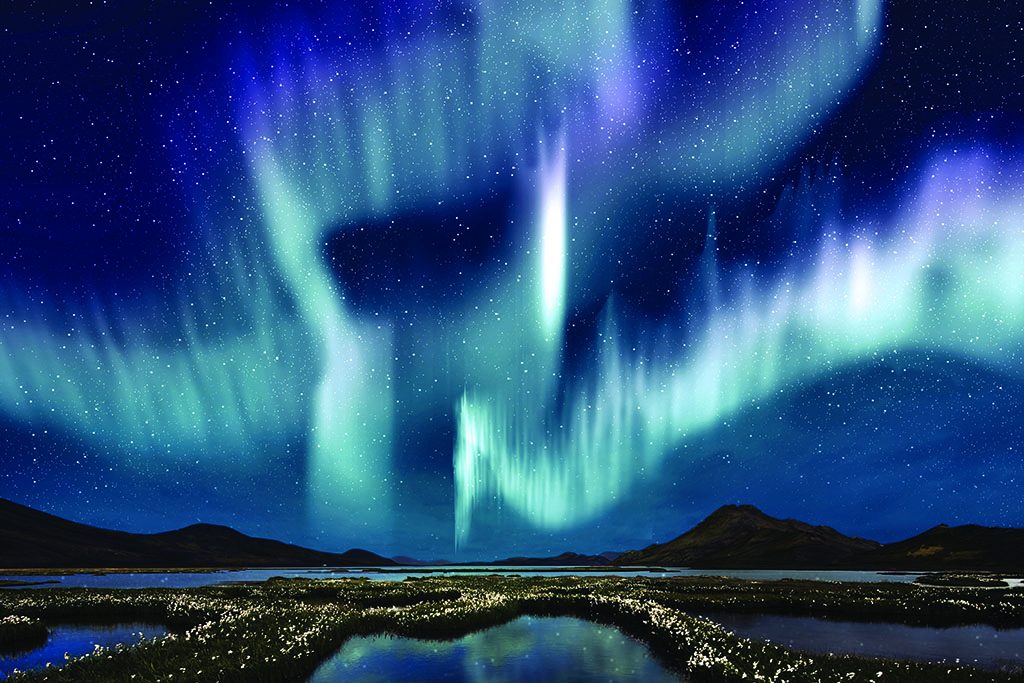 Einar calls us back to the Jeep, and we gleefully skip back to the car. Being used to giant shows of light, he playfully laughs at our astonishment over a tiny light squiggle and whips out a bottle of Brennivín and hands us two shots. We arrive in the sleepy, rural town of Stokkseyri where a lobster feast awaits. We stuff ourselves at Fjöruborðið Restaurant with gorgeous little North Atlantic lobsters and wash them down with a local beer called Skjálfti.

Any escape to Iceland is part big-city excitement and part blissful isolation. Experiences here are part sobering and part wild, part innovative and part traditional, and always inspiring. Authors like Jules Verne and JRR Tolkien, singers such as Damon Albarn and Yoko Ono, and directors like Quentin Tarentino and Peter Jackson have all been influenced by a visit to Iceland. With this kind of hold on people, it’s no wonder an official campaign was launched by the tourism board called Inspired by Iceland. Online you can read through nearly a thousand, user-submitted stories of how the country has worked its magic on, influenced, and changed the people who come here.

On our way to the airport, we stop at the Blue Lagoon, and we take in the otherworldly environment. We rub on rejuvenating silt masks and laugh about the adventures we’ve had. Then Reed looks at me and says those magical words that have been uttered by oh so many visitors to Iceland, “When we come back…”

Falling In Love With Iceland was last modified: January 22nd, 2018 by millawynn