During the tea, Lear also hands us green carnations, a de facto symbol for both Wilde and homosexuality. As we place them through our buttonholes, Lear reminds us that during the first performance of Lady Windermere’s Fan, Wilde encouraged an actor to wear a green carnation, and also insisted his friends sport the flower as well, which would have been dyed with arsenic in Victorian times. While Wilde contended the flower meant “Nothing whatever…” it became a vibrant symbol of queer culture. “Pretty boys, witty boys too, too, too…and we all wore a green carnation,” Noël Coward wrote in Bitter Sweet in 1929 showing the long-lasting effect of this symbolic gesture, and we proudly sport ours throughout the trip. After a couple of days in Dublin with Lear, I am filled with excitement about what’s to come next.

Lear arranges for our group to meet with Brian Merriman, the founder of the International Dublin Gay and Lesbian Theatre Festival which is currently going on. Despite the chaos of running this large-scale endeavor, Merriman takes the time to sit down with us to discuss both the festival and Ireland’s gay theater history. Gay theatre actually existed for quite some time in Dublin, he begins to tell us, when a gay couple, Hilton Edwards and Micheál MacLiammóir, opened up the Gate Theatre in 1928. “Born in London, MacLiammóir met Hilton, learned Irish, changed his name to Irish, and they lived as an openly gay couple,” he explains to our astonishment. The two were responsible for bringing European and American theater to the city. “Everyone knew they were partners, and they were made Freeman of the City, although they couldn’t get married,” he says. There are great parallels between MacLiammóir and Wilde as Merriman notes in his book Wilde Stages in Dublin, “[MacLiammóir] also adopted a bit of the larger than life persona of Wilde, as many an actor has imitated since. It implies class and intellect, and the pace of conversational delivery emphasizes that point, as does the deliberate broadening of vowels.”

That’s not to say that the couple wasn’t treated any differently by society, Merriman notes: “[They]…were strong in their presentation of historical, Shakespearian, and romantic characters for decades in theatre and yet they were known as ‘The Boys.’ Boys don’t run theatre companies, avoid bankruptcy, persuade investors, employ artists, and establish and sustain a national theatre at The Gate…But ‘boys,’ the talented young men drawn to the escapism of theatre in a hostile society, knew no matter what your status or achievement, a gay artist could never be a man, but remained a ‘boy’ forever.”

Attitudes, and society as a whole, changed later in their lives. While sodomy laws were still on the book in the 1970s when MacLiammóir died, in a grand gesture, to show how important he was to growing the culture of the city, the president of Ireland attended his funeral, while Edwards served as chief mourner. Their legacy continues to live on in the city, as the Gates Theatre is still wowing audiences, and will eventually wow me with their production of An Ideal Husband.

“In so many ways, theatre created a ‘safe haven’ for gay people, on stage or behind the scenes…” he says. And this escapism is a big reason for the creation of the festival, which has its beginnings in 2004. It wasn’t an easy ride for Merriman who tells about how difficult it was to even cast a production of La Cage Aux Folles. Besides sponsorships and fundraisers, an unimaginable thing in 2004, he tells us the festival is beginning to be embraced by “straight” people who have both volunteered and attended the international offerings. It has recently seen more support from the government and the city. Support can be seen further by looking at the banners featuring a picture of Wilde outside of Dublin Castle (these same posters also once greeted passengers arriving at the airport).

Step this way,” Assistant Junior Dean Joseph O’Gorman from Trinity College, one of the most prestigious colleges in Europe, tells us in a BBC-like accent as we try our best to stay out of a passing storm. O’Gorman, who is dressed like a proper dandy, complete with a pocket square, matching suit, a cane, and perfectly round glasses, takes us around the campus. Wilde attended university here from 1871-1874 and chose to live on campus his second year, despite his family home being only a few short blocks away. O’Gorman points out a quad that had been dubbed Botany Bay, because of its less-than-ideal location, but its green lawn and ivy-covered windows makes it seem more like a storybook castle to modern-day observers. O’Gorman is a thrilling storyteller and happily shows us Trinity’s main attractions that are open to the public, including The Book of Kells. As one of the most precious artifacts from medieval times, deciphering the magnificent artworks’ symbols comes second-hand to O’Gorman, so much so, that our small group soon added a few extra members who were eager to listen. He then takes us to Trinity’s Old Library, which is an architectural feat with its barreled ceiling and windows that illuminate the centuries-old books. O’Gorman tells us about the unique challenges of preserving a collection of books this old, including how climate change is threatening their preservation.

An important place to visit, if you’re literarily inclined, is the Dublin Writers Museum on Parnell Square (you’ll also want to check out the Garden of Remembrance complete with the gorgeous sculpture “Children of Lir”). Divided into two rooms, the museum tells the story of Ireland’s rich literary history. From Gulliver’s Travels, Bram Stoker, and Wilde to famous 20th-century Irish writers like James Joyce, the museum does an excellent job of creating a timeline as well as putting things into historical perspectives, and I revel in the first editions and artifacts strewn throughout.

My last day in Dublin, I say goodbye to my tour group, and I check into a more modern hotel, The Dylan, a boutique, five-star, Preferred Pride hotel that’s about a 20-minute walk from St. Stephen’s Green in D4, (“the poshest neighborhood in the country,” one local tells me). The hotel is fantastically new, friendly, and spacious. It surprises me how off-balance I feel getting back to modern times, because the Dublin I know so far has been written on pages over a century ago. But history is never too far behind in the European capital, and as I open my window I see children freely playing in a centuries-old church courtyard, enjoying the springtime sunshine. 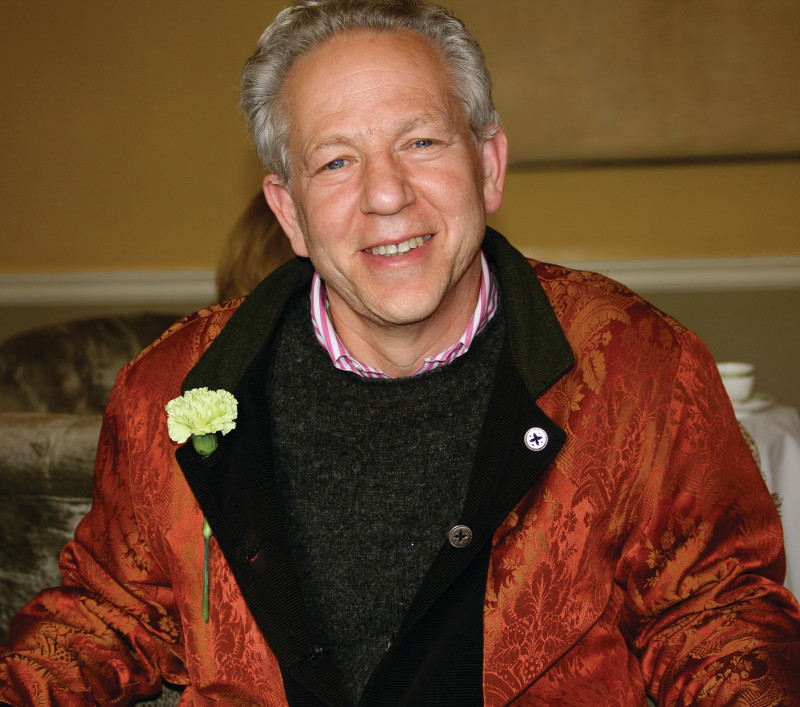 I too enjoy my newfound freedom, and I walk back to the city center, passing flower stands and cute boutiques, and taking in the sights and sounds of a bustling city. I meet with Scott De Buitléir, a young man who created a gay publication called EILE, which is Irish for others. We sit at Café en Seine where I learn about the challenges of creating a publication for the diverse LGBT population in Ireland and Northern Ireland. “Ireland has become wonderfully progressive in recent years, despite it’s Catholic, conservative traditions, so now the challenges facing EILE (www.eile.ie) are similar to almost any other venture,” he says. “How to make it, and keep it, financially viable,” Scott adds matter-of-factly. He then happily walks me through the vibrant Dublin streets where street performers, shoppers, and early-afternoon pub-goers cram the layed-brick pedestrian thoroughfare of Grafton Street.

It’s in a small nearby section of the city called the Italian Quarter that I’m introduced to two Dublin locals, and gay roommates, Tom and Oisín. They take me to gay-owned café Lemon Jelly. “It’s one of those rare Irish days where the sky is blue,” Tom says with a smirk through his salt-and-pepper beard. We sit outside, and over a bottle of white wine talk about life in Dublin. “We may not have a gay area or loads of gay clubs, but it’s more integrated with the straight scene,” Oisín says taking a bite out of his mozzarella panino. “We have the youngest population in Europe, so it’s still up and coming. The immigration we have experienced in the last few years has made it more dynamic and has brought a new energy to the scene!” he proclaims with a raised glass for a cheers. Tom is quick to also point out how quickly Dublin and Ireland as a whole have changed. “There has been a revolution in the last 20 years. We’ve gone from homosexuality being a crime to a drag queen hosting a daytime game show to several of our top newscasters and broadcasters [Derek Mooney and Michael Murphy] being openly out and even civil partnered,” Tom says.

The boys are happy to take me out to their local watering holes: The Front Lounge, The Dragon, and to the famous Panti Bar. But, I’m meant to catch an early flight, and I begin my walk back to my hotel. On the way, I look over at Oscar in the park, still eying his home, and I try to fixate on exactly which part of the home he’s looking at. The cloudless sky allows the moon to reflect a cool blue from the corner window, reminding me of the matching stained glass that graces the first floor, and I watch as college students weary from a night out stand outside the front door smoking cigarettes.

My week in Dublin has given me a new understanding of our own collective gay history as well as Ireland’s. I walk past these students, I hope and wish that they too will one day see their school, Dublin, Ireland, and the world, with a new perspective. “Anybody can make history; only a great man can write it,” I think of Wilde writing in The Critic as Artist, and I tip my hat to a man that, as his mother unknowingly wrote, has become a defiant hero, a conqueror, a martyr, and a diety for the modern gay community.