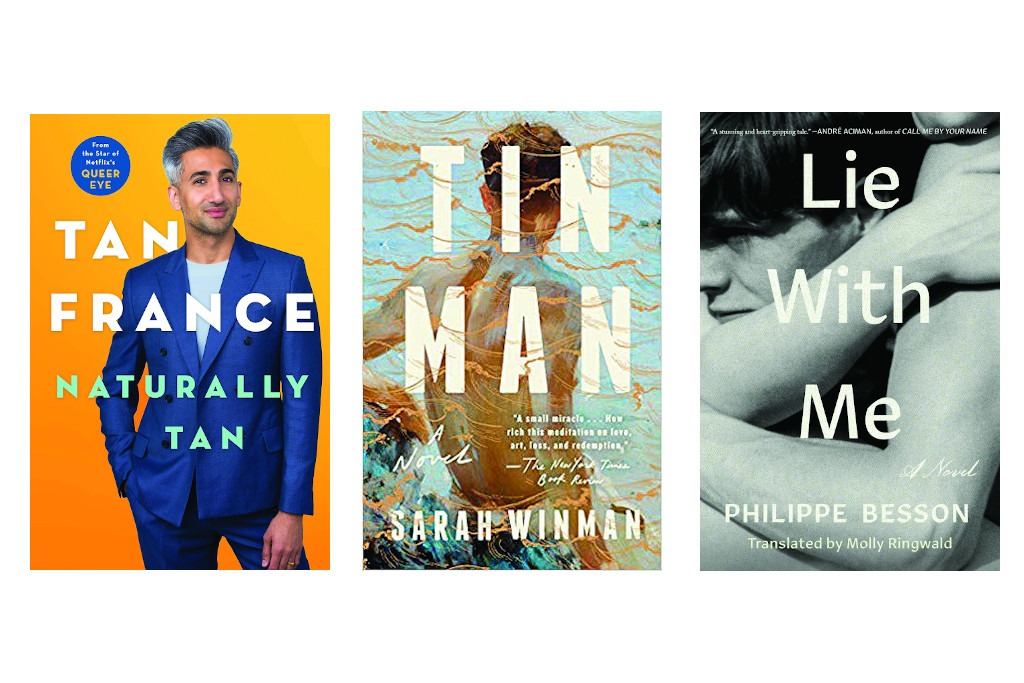 From coffee table tomes, to trivial trinkets, to great gay stories to enjoy during the long winter nights, there’s plenty here to keep the pages turning.

For the holiday season, we’ve loaded our sleigh with what we believe are the best gift books of 2019,  a collection of both serious and silly, to unwrap and read at home or while on vacation. From coffee table tomes, to trivial trinkets, to great gay stories to enjoy during the long winter nights, there’s plenty here to keep the pages turning all the way to springtime. 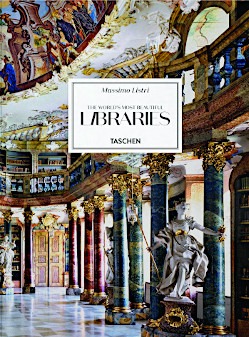 What better gift for a lover of both books and travel than Florentine photographer Massimo Listri’s gorgeous, gargantuan coffee-table gallery of The World’s Most Beautiful Libraries ($200. Taschen. www.massimolistri.com). With 560 pages of stunningly detailed large-format images weighing in at over 16 pounds, the book includes portraits of many institutions open to the public and many others you’ll likely never gain access to. From the Metten Abbey Library in Bavaria, with its Baroque gilded ceilings held up by sculpted pillars; to the dark wood shelving punctuated by busts of great authors at Trinity College Library in Dublin, Listri’s images will enchant history buffs and architecture aficionados as well as bibliophiles. Accompanying texts offer detailed background information on each library, including its design, its history, and the most intriguing items in its collection. The book’s title is of course arguable, especially since it leans toward Europe and only includes collections established between the 15th and 19th centuries (the astonishing modern architecture on display at libraries in Helsinki, Seattle and Calgary will have to wait for a follow-up volume). In the meantime, this is one to set bookworms wriggling with delight. 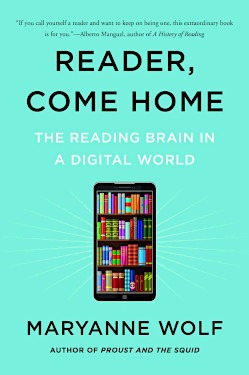 One of the great but infrequently acknowledged pleasures of vacation travel is the space it carves out in our lives for reading. While others watch movies on too-small seatback screens, some of us savor the opportunity a long-haul flight provides to crack open a juicy novel. And then there are the books we read while lolling in hammocks, lounging on beach chairs, or before going to bed in a hotel room. How strange that an activity we could literally enjoy anywhere seems more and more tucked away into our travels, a luxury rather than a basic part of daily life. In Reader Come Home: The Reading Brain In A Digital World, Maryanne Wolf ($17.99. Harper. www.maryannewolf.com) provides fascinating insights about what goes on in our brains while we read, and why many of us feel that our ability to immerse ourselves in a good book has withered in recent years. This is by no means an artsy tech-bashing argument: Wolf draws on neuroscience to explain the very real differences in how we process and experience information delivered via digital devices and printed pages. She explores the relationship between concentration and memory, and the ways that different mediums subtly alter the nature of our attention. Reading this on the road will inspire many more trips to your bookshelves back home. 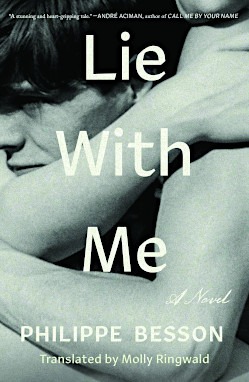 If your adolescence coincided with the Brat Pack of the 1980s, you’re an ideal reader for French writer Phillipe Besson’s autobiographical novel, Lie With Me (Simon & Schuster. $25. www.facebook.com/philippe.besson.auteur). This slim, poignant chronicle of teen romance during that same period ventures deep into the pinkness where Pretty In Pink feared to tread: Gay boys. As a bonus, the text has been translated into English, quite poetically, by none other than Molly Ringwald. With so many queer-positive empowerment stories being published and promoted lately, it’s oddly, refreshing to find a new book that realistically harkens back to the fraught feelings associated with sexual awakening and
coming out (or not) toward the end of last century. Lie With Me feels foreign not just because its 17-year-old secret lovers live in parochial rural France, but because the agony of their affair, the hiding, the social reprobation, the shame, is redolent of a past made distant not only by time, but by societal change. Besson acknowledges this distance by telling the main story as a flashback spurred by one of the now-grown teenagers accidentally running into a son of the boy he once adored. A heartfelt and humid read. 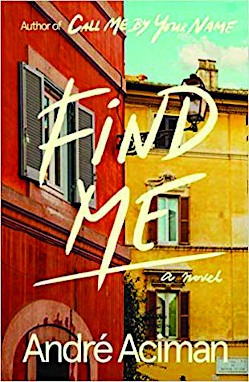 There’s more Euroluscious reading, and another connection to the movies, in Andre Aciman’s recently published Call Me By Your Name sequel, Find Me (Farrar, Straus and Giroux. $27. www.findmenovel.com). The novel’s first two sections are its most interesting, revisiting Sami, the father of Elio in Call Me By Your Name about ten years later; he’s divorced from his wife, but seems not at all gay (this is a sequel to the book, not the film). Sami falls in love with a woman who is about his son’s age. And in the book’s central, and most involving portion, Elio, a successful pianist, falls into a tenderly rendered relationship with a man his father’s age. These truly intergenerational May-December romances make Elio’s affair with Oliver in the first book feel like small potatoes in comparison. That first love of Elio’s, however, has a lasting impact on both him and Oliver, who haunts this book’s early portions in spirit, but only takes an active part in the concluding, and weakest, sections during which a reunion (which will be highly anticipated by many readers) finally takes place only to feel forced and fall flat. That said, the heart of Find Me, Elio’s affair with the elegant, aging Michel is rich and romantic, a resonant and satisfying read In itself. 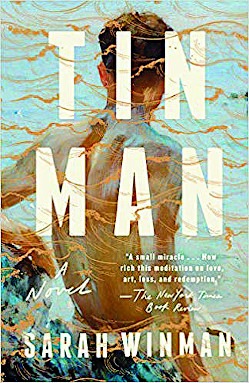 Three of the most absorbing, and most ballyhooed, novels about gay men in recent years have been written by women. This column has featured Hanya Yanagihara’s harrowing A Little Life and Rebecca Makkai’s The Great Believers, both of which went on to become National Book Award finalists. But somehow, we overlooked a more intimate gem, British author Sarah Winman’s achingly tender Tin Man (Putnam. $14. bit.ly.com/TinManWinman), which tracks the decades-long friendship of Ellis and Michael who meet as 12-year-old boys in a working class section of Oxford. As young adults, the boys aspire to lives in the arts and befriend spritely Annie, and the three become an improvised family of sorts. Ellis eventually marries Annie, while Michael heads off to seek his fortune, and find himself, in London. The delicate way this book gets ahold of the reader’s heart is nearly impossible to describe, but Winman is able to make one feel almost palpably both deep loneliness and the simple but profound pleasures of companionship. Van Gogh’s painting “Sunflowers” plays an important spiritual role in the lives of Winman’s characters, who themselves will provide readers with a sublime bit of sunshine on even the coldest winter day. 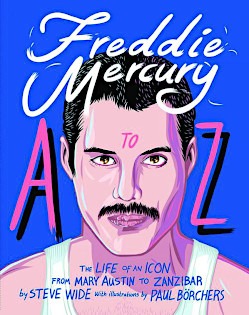 Pop music trivia meets colorful eye-candy in two celebrity-centric illustrated books with special appeal for gay giftees. Freddie Mercury A to Z ($29.99) is not your childhood alphabet book: British DJ Steve Wide has loaded all manner of biographical fun facts about the queen of Queen into a lively compendium that explodes with the distinctive artwork of Paul Borchers, a San Francisco-based illustrator. From A is for Mary Austin, Mercury’s longtime female friend and perhaps truest love, to Z is for Zanzibar, the east African island where the rocker was born, the book is a richly detailed non-linear trip through both touchstone and little known element’s of the Mercury story. 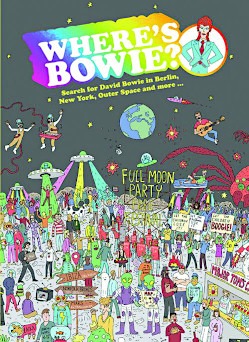 Where’s Bowie? ($24.99) simultaneously pays tribute to Gen X kid’s lit and Boomer music. Inspired by the Where’s Waldo? search-and-find picture books, each spread of illustrator/conceptualist/superfan Kev Gahan’s endlessly clever book features a crazily crowded image of an imagined scenario from David Bowie’s life: A Berlin street scene, a night at Studio 54, a Ziggy Stardust space scene. Somewhere amidst the huge crowds portrayed in each is a teeny-weeny Bowie. At the back of the book, you’ll find illustrated solutions along with info about how some of the other details in each image connect to Bowie’s real life adventures. (Both from Smith Street Books, www.smithstreetbooks.com)

Put These Elves On Your Shelves 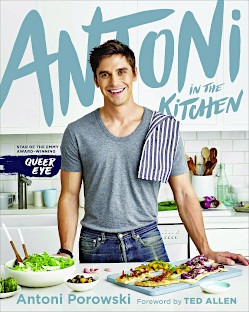 Reader’s delight or gag gift? Depends on who’s giving and who’s receiving. But four of the current Queer Eye quintet have recently published books, and an ad hoc boxed set makes for an affordable but nonetheless over-the-top package under the tree. The least revealing of the volumes is also the best long-term investment: Cooking Guy Antoni Porowski’s Antoni in the Kitchen (Houghton Mifflin Harcourt. $30. www.antoniporowski.com), features 100 relatively easy recipes in what young Master P refers to as a “culinary autobiography,” but is really just a decent, eclectic cookbook; its quite handsomely deslgned, especially if your notion of handsome includes Antoni’s whole smirky/sexy gecko aesthetic.

Karamo: My Story of Embracing Purpose, Healing and Hope (Simon & Schuster. $27. www.kstately.com) and Over The Top: A Raw Journey to Self-Love (HarperCollins $27.99. www.jonathanvanness.com) are Brown and VanNess’ trauma-and-inspiration packed personal narratives, full of substance abuse, self-harm, and psychotherapeutic realness (one of them has a sense of humor, too). But the unexpected dark horse (well, tan horse) winner of the bunch is Fashion Guy Tan France’s gentle and genuinely engaging Naturally Tan (St. Martins Press. $27.99. www.tanfrance.com). Structured as brief autobiographical essays, the book shares France’s story of growing up gay and Muslim in London, launching and later selling several enormously successful clothing businesses, and settling down in Salt Lake City with his husband, who was raised Mormon. France, who doesn’t drink, gamble or do drugs, has led the most distinctive life among this quartet, and his story will resonate with many men who aren’t particularly interested in the mainstream gay scene. Alas, there’s no book yet from fifth wheel, Bobby Berk, but if you’re set on assembling a Fab Five Library, you can always go vintage and add O.G. Carson Kressley’s 2005 children’s book—it’s about a picked-upon unicorn named Trumpet. 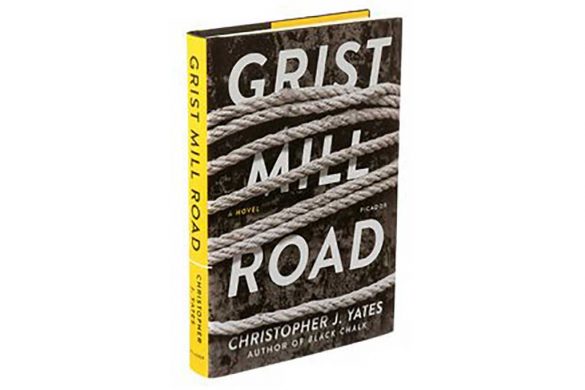 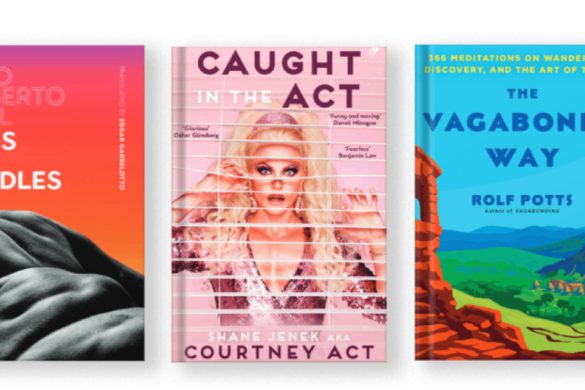 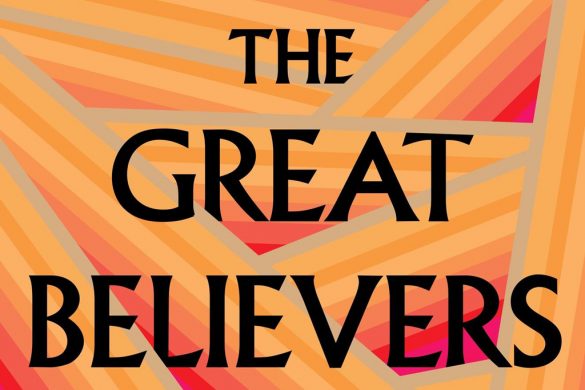 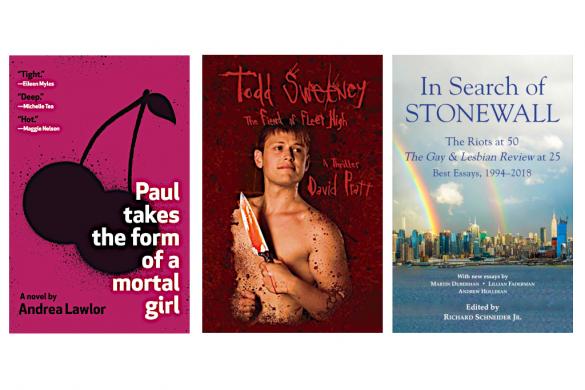 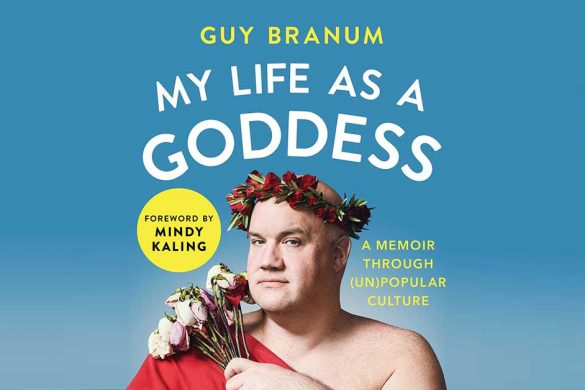